Discrete co(sin) transform at a glance. Main reasons of why is it predominantly used in lossy (video) image compression systems.

Let us recapitulate the main steps of processing a video frame as it is being encoded using a H.265/HEVC system (Fig. 1). At the first step, termed conventionally “block division”, the frame is divided into blocks called CUs (Coding Units). The second step involves predicting the image inside each block using spatial (Intra) or temporal (Inter) prediction. When temporal prediction is being performed, a CU block can be divided into sub-blocks called PUs (Prediction Units), each of which can have its own motion vector. The predicted sample values are then subtracted from the sample values of the image being coded. As a result, a two-dimensional (2D) difference signal, or Residual signal, is formed for each CU. At the third step, the 2D array of Residual signal samples is divided into so-called TUs (Transform Units) that undergo a 2D discrete cosine Fourier transform (with the exception of the 4×4-sized TUs containing intra-predicted intensity samples, for which a discrete sine Fourier transform is used).

Then the resulting spectral Fourier coefficients of the Residual signal are quantized by level. At the final step, the data about all operations performed at each of the four stages are sent to the input of an entropy encoder. This data can be used later to restore the encoded image. The entropy encoder performs additional lossless compression on the incoming data using Context Adaptive Binary Arithmetic Coding (CABAC) algorithms.

Why is the DCT used predominantly in lossy (video) image compression systems? To answer this question, we need to invoke some results from the theory of random processes that were initially obtained by Hotelling and published in 1933. Hotelling proposed a method of representing time-discrete random processes as a set of uncorrelated random coefficients. During the 1940s, Karhunen and Loève published papers proposing a similar representation for time-continuous random processes. Both the discrete and the continuous transforms are now referred to as the Karhunen-Loève transform, or eigenvector decomposition, in most of the digital signal processing literature. Let us summarize these results here for the specific case of a 2D discrete random process (image).

The Karhunen-Loève transform is given by

where $\displaystyle K_{C}(j,k) $ is the vertical image covariance,  j and k are pixel row indices,  $\displaystyle K_{R}( i,l)$ is the horizontal image covariance, and i and l are pixel column indices. If the covariance is separable, the Karhunen-Loève transform kernel is also separable, and the transformation can be applied first for columns and then for rows (or vice versa). In this case, the Karhunen-Loève transform kernel can be expressed as

and each term in the product satisfies its own equation:

Thus, the Karhunen-Loève transform makes it possible to represent a digital image as a set of uncorrelated random variables. But how does this help? What is so remarkable about this representation? The Transform and Data Compression Handbook edited by K.R. Rao and P.C. Yip. (Boca Raton, CRC Press LLC, 2001) answers this in the most comprehensible way. In the chapter on the Karhunen-Loève transform, the authors consider the following experiment. They propose dividing the image into non-overlapping blocks as shown in Figure 2 (taken from the book). 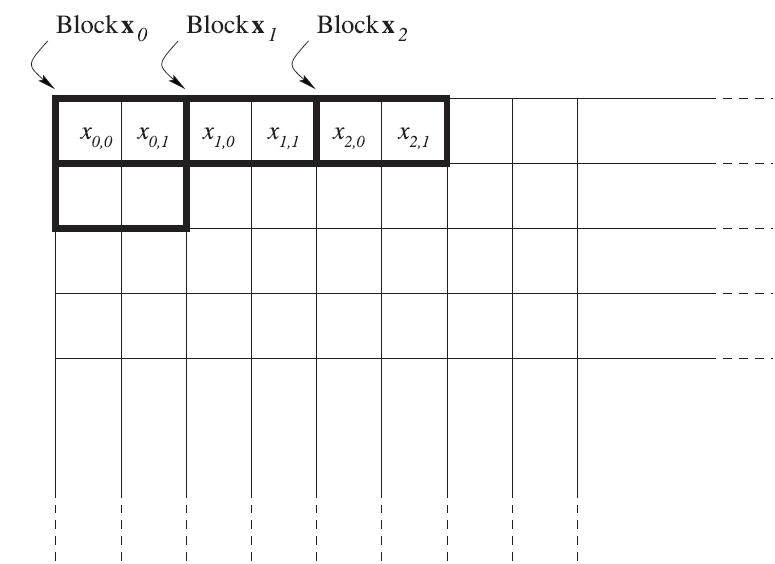 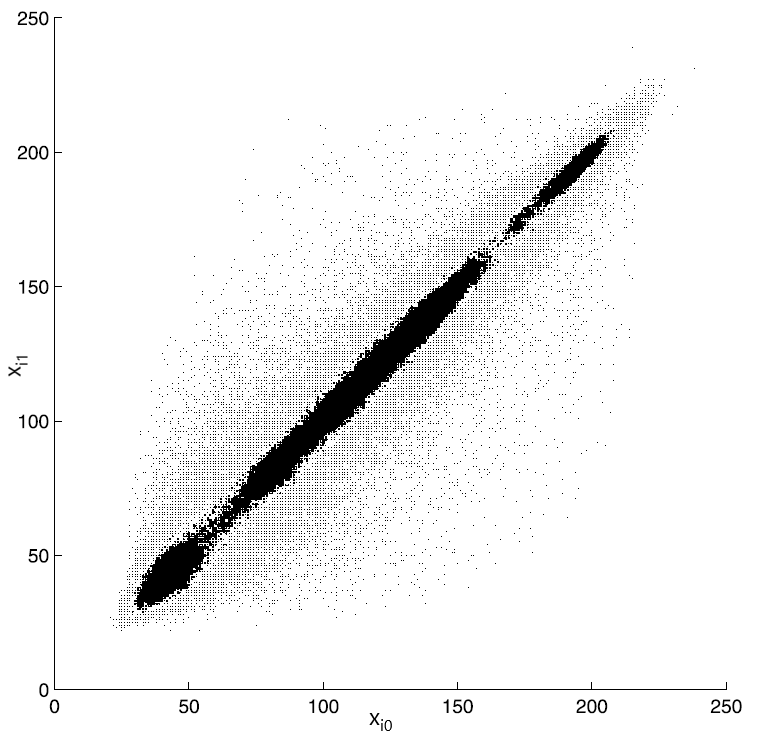 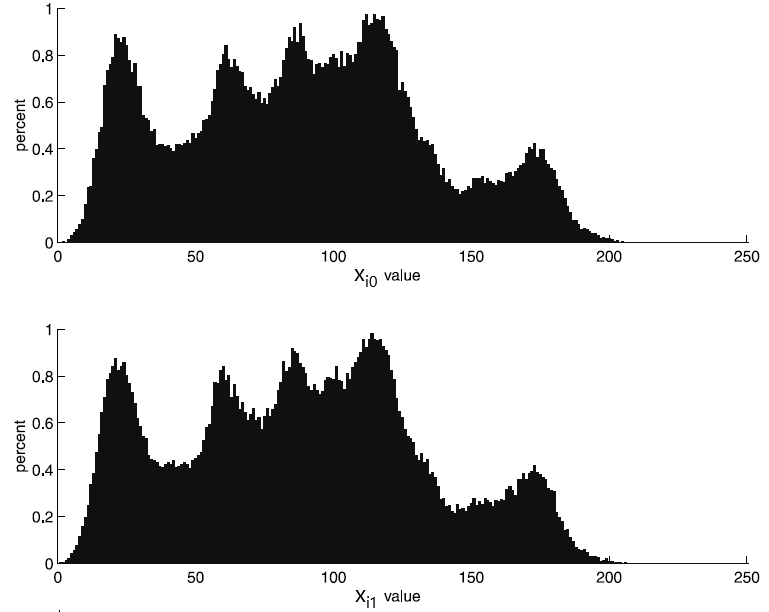 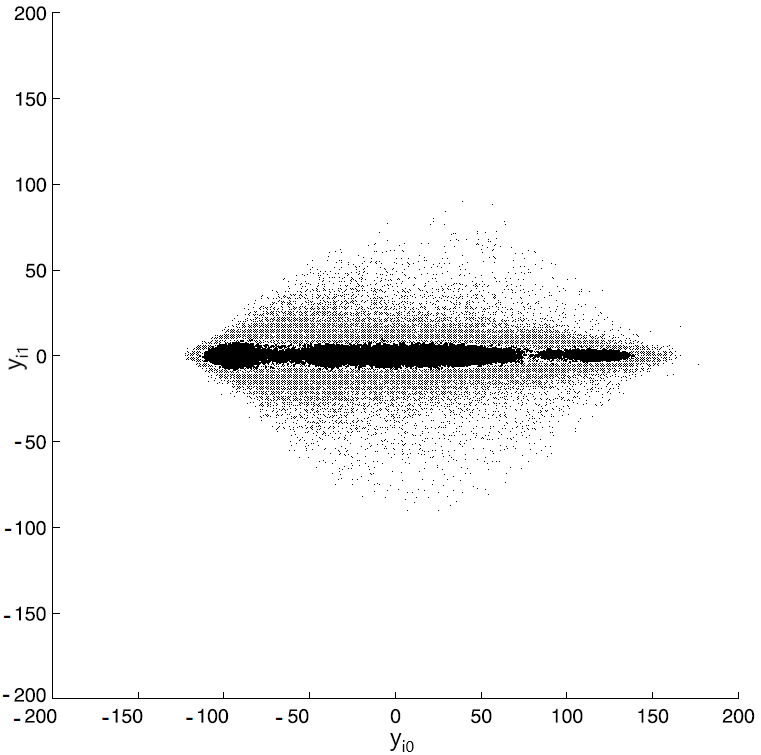 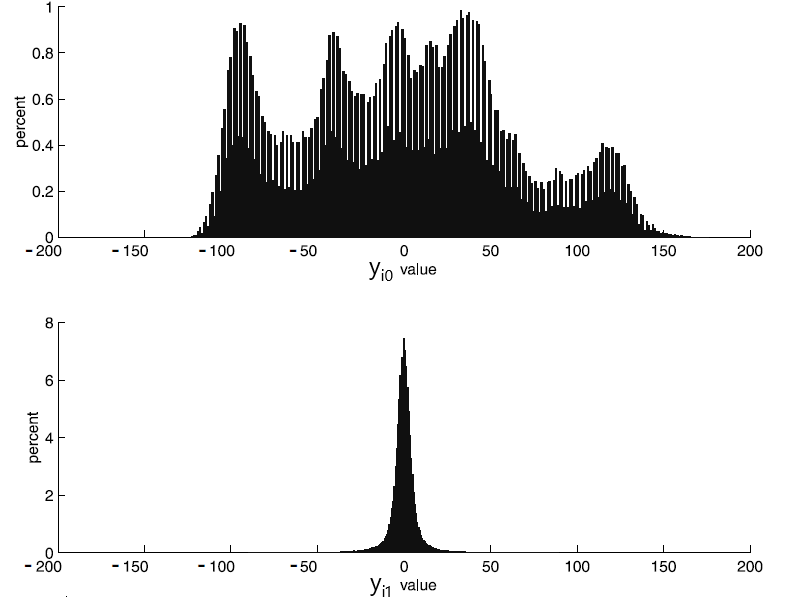 Figure 6. Histograms of coordinate values for the vectors $\displaystyle \overrightarrow{y_{i}} $ .

The Karhunen-Loève transform has one—but significant—disadvantage. The kernel of this transform is defined by the statistical nature of the data being processed and requires the above equations to be solved for each set of vectors $\displaystyle \overrightarrow{x_{i}} $. Analytical solutions for these equations are only known for some special cases. A numerical solution, while possible, is so computationally intensive that using the Karhunen-Loève for video image processing becomes virtually impractical.

One special case of random processes, for which an analytical solution of the Karhunen-Loève transform kernel equations is known, is that of type I Markov processes. The correlation function for such processes has an exponential form when their values have a normal (Gaussian) distribution. For a discrete one-dimensional random process, the correlation function $\displaystyle K(i,j) $ has the form

where $\displaystyle 0\leqslant ρ \leqslant 1$ It has been shown in the paper Relation between the Karhunen Loeve and cosine transforms (RJ.Clarke, B.Tech., M.Sc, C.Eng., Mem.I.E.E.E., M.I.E.E. IEEPROC, Vol. 128, Pt. F, No. 6, NOVEMBER 1981) that for $\displaystyle ρ → 1$, the solution obtained for a Markov process coincides with the Type II discrete cosine Fourier transform, or DCT-II (as is commonly known, eight types of this transform exist in total). On the other hand, numerous studies of statistical properties of digital images have shown that the horizontal $\displaystyle K_{R}(i,j) $  and vertical $\displaystyle K_{C}(i,j) $ correlation functions of images are exponential in form. The values of $\displaystyle ρ$ for both are close to 1 (ranging from 0.95 to 0.98). This means that for most images, DCT-II is a very good approximation to the Karhune-Loève transform, and the horizontal and vertical transform kernels have an identical form:

Let us return to the first question that was asked in the beginning of this article.

Why is a discrete (co)sine transform used at the third step? The reason for using DCT is clear: this transform is a good approximation to the Karhunen-Loève transform for most images, including those obtained by inter-prediction, i.e. for the residual signal. But where did the sine transform come from?

that coincides with the kernel of the discrete sine Fourier transform.