Using integer arithmetic for coding and the actual meaning of the “Context Adaptive” part in the term CABAC.

We have now given a brief analysis of the arithmetic encoding and decoding algorithms and discussed the procedures for transforming the values of syntax elements that describe the video frame content in an encoded stream into a binary bin stream, which is what is actually subjected to binary arithmetic coding. There are, however, some important things that we have not discussed yet. First, in the algorithms considered thus far, encoding and decoding have been done by splitting the current interval. The interval length is always less than 1, so the computations have to be performed using non-integer arithmetic. Second, encoding and decoding requires information on the probabilities of the symbols being encoded appearing, namely the probability of the least probable symbol $\displaystyle P_{LPS}$ occurring in the stream and the value of that symbol. Where do the encoder and decoder get this information? Finally, we still have not addressed the actual meaning of the “Context Adaptive” part in the term CABAC. Let us now deal with these remaining questions.

To answer the first question, the use of integer arithmetic for coding looks at first glance like an obvious possibility. One just needs to stretch the initial interval $\displaystyle [ 0,1)$ by an integer multiplier (e.g. 512), represent the probability $\displaystyle P_{LPS}$ as an integer divisor, and round off their quotient, after which all interval splitting operations can be performed as approximate computations using integer arithmetic with a specified resolution. The only unknown here is how much efficiency (i.e. compression ratio) will be lost due to the approximation. As early as the beginning of the 1990s, a number of theorems were published and proved that made it possible to estimate the loss of compression ratio (see, for example, P. G. Howard, J. S. Vitter Analysis of Arithmetic Coding for Data Compression, Information Processing and Management 28 (1992), 749 – 763). These losses resulting from the approximate nature of the computations turned out to be minimal. Thus, it was proven that efficient implementation of binary arithmetic coding algorithms based on integer arithmetic is possible.

The developers of CABAC went even further in that direction. They suggested coarsening the values of the current interval length $\displaystyle R$ and probability $\displaystyle P_{LPS}$ to such an extent as to be able to compute all possible values of the product $\displaystyle R_{LPS} =R\cdotp P_{LPS}\\$ in advance. The resulting proposed CABAC algorithm replaces the computationally intensive multiplication operation with a lookup from a table populated with pre-computed multiplication results (in the standard, see Table 9-40 – Specification of rangeTabLps depending on the values of pStateIdx and qRangeIdx). Let us consider this in more detail.

The flow diagram for the decoding algorithm modified to use integer arithmetic is shown in Figure 1. 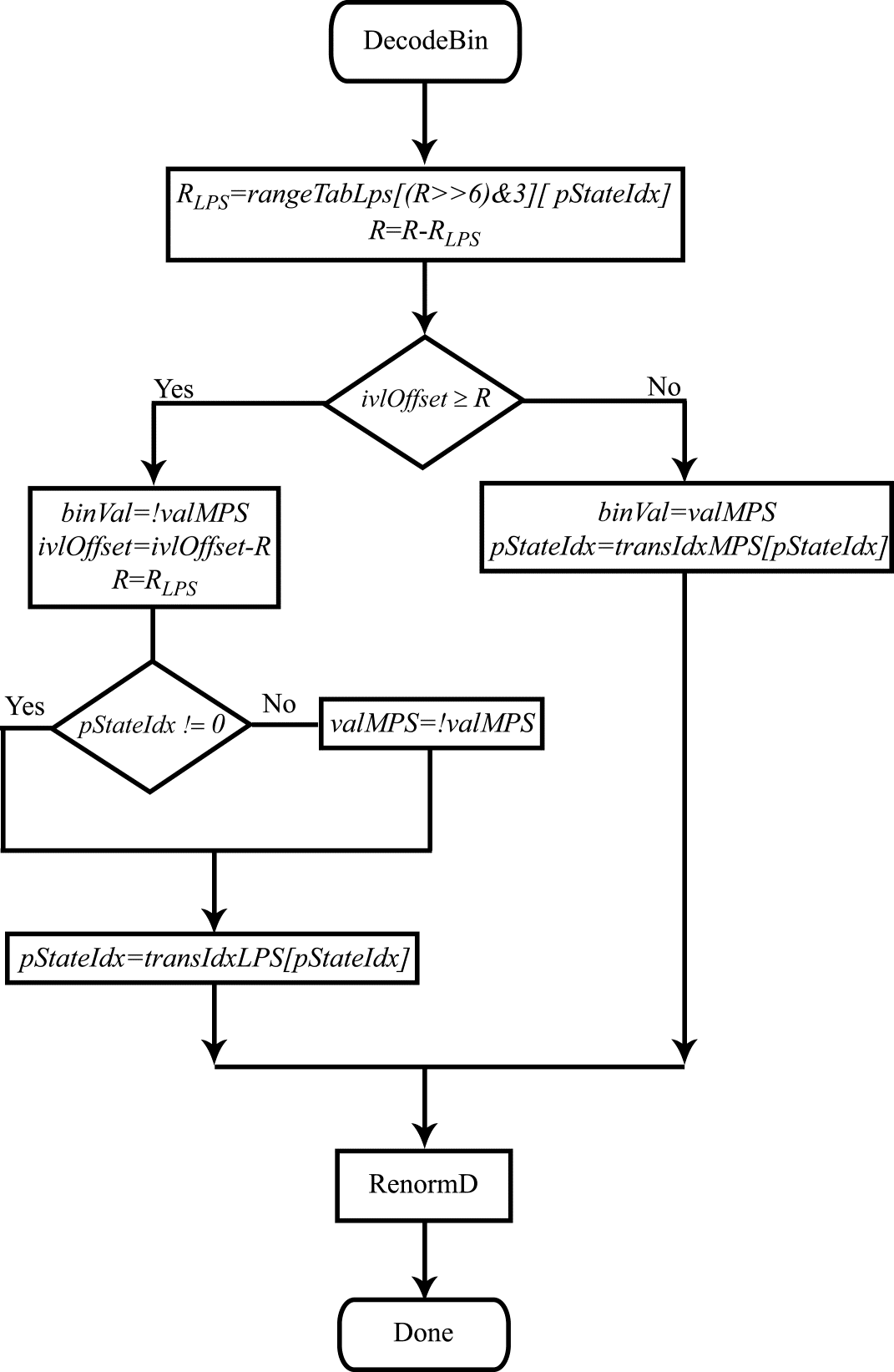 The flow diagram for the decoder renormalization procedure is shown in Fig. 2. 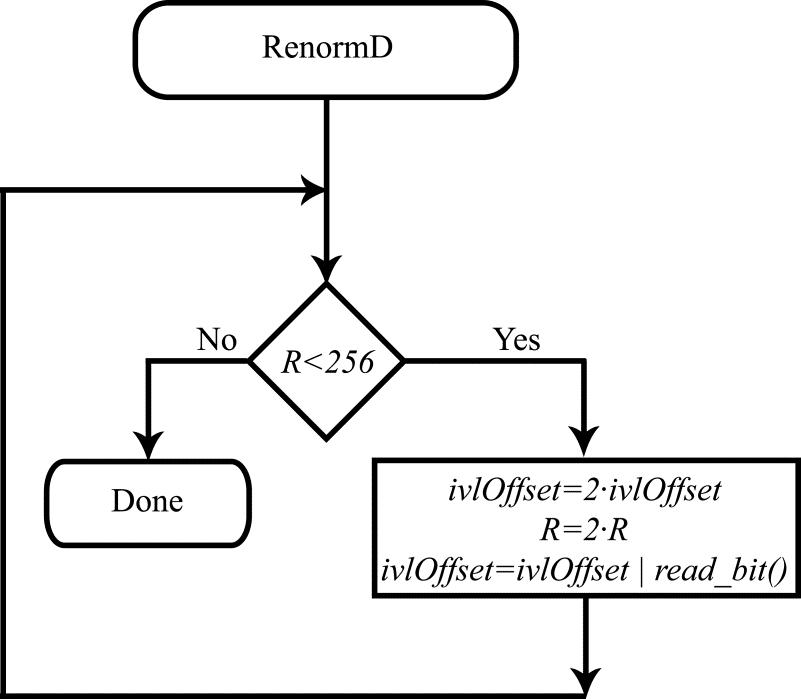 The flow diagrams for the encoding and encoder renormalization algorithms are shown in Figs. 3 & 4. 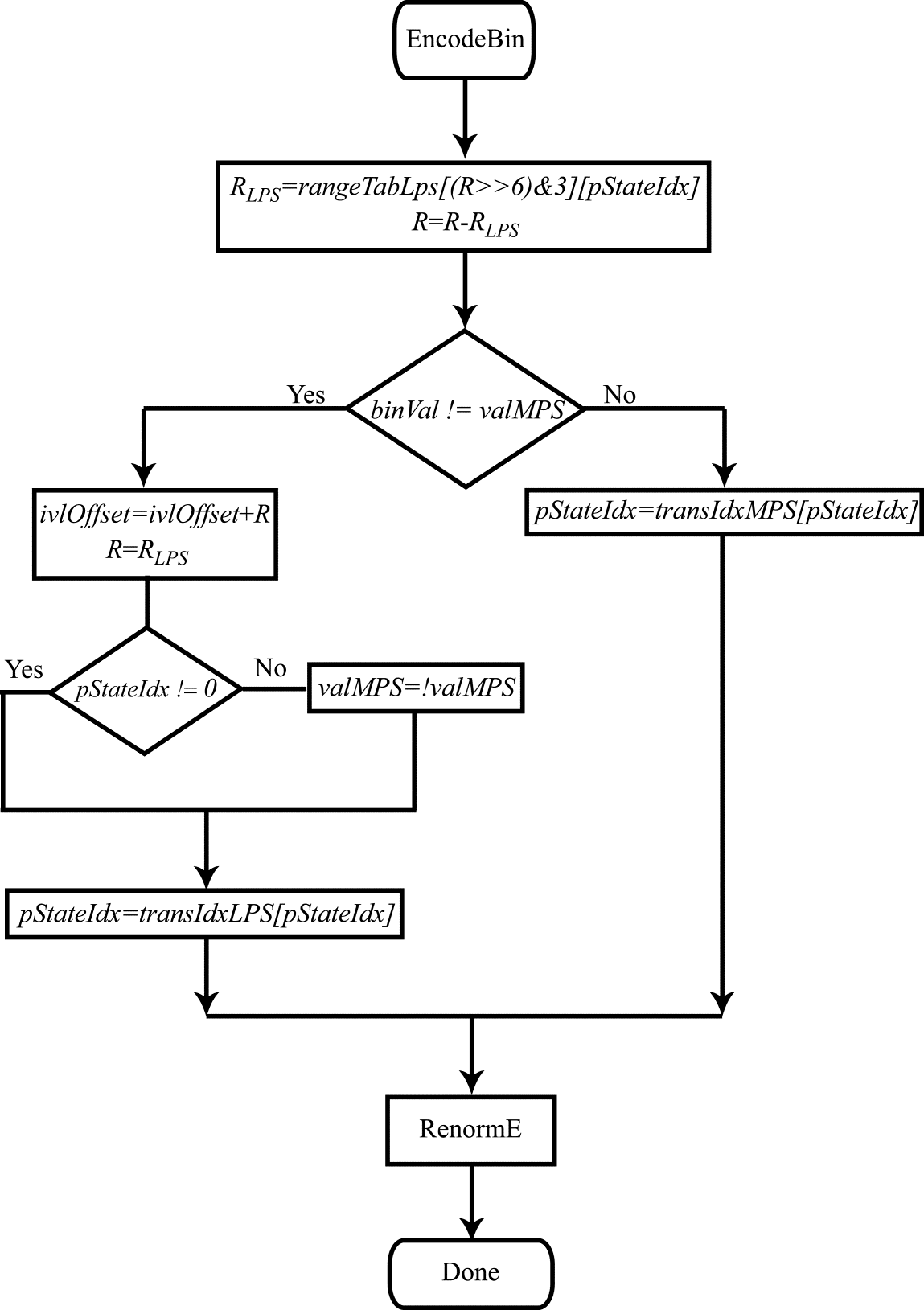 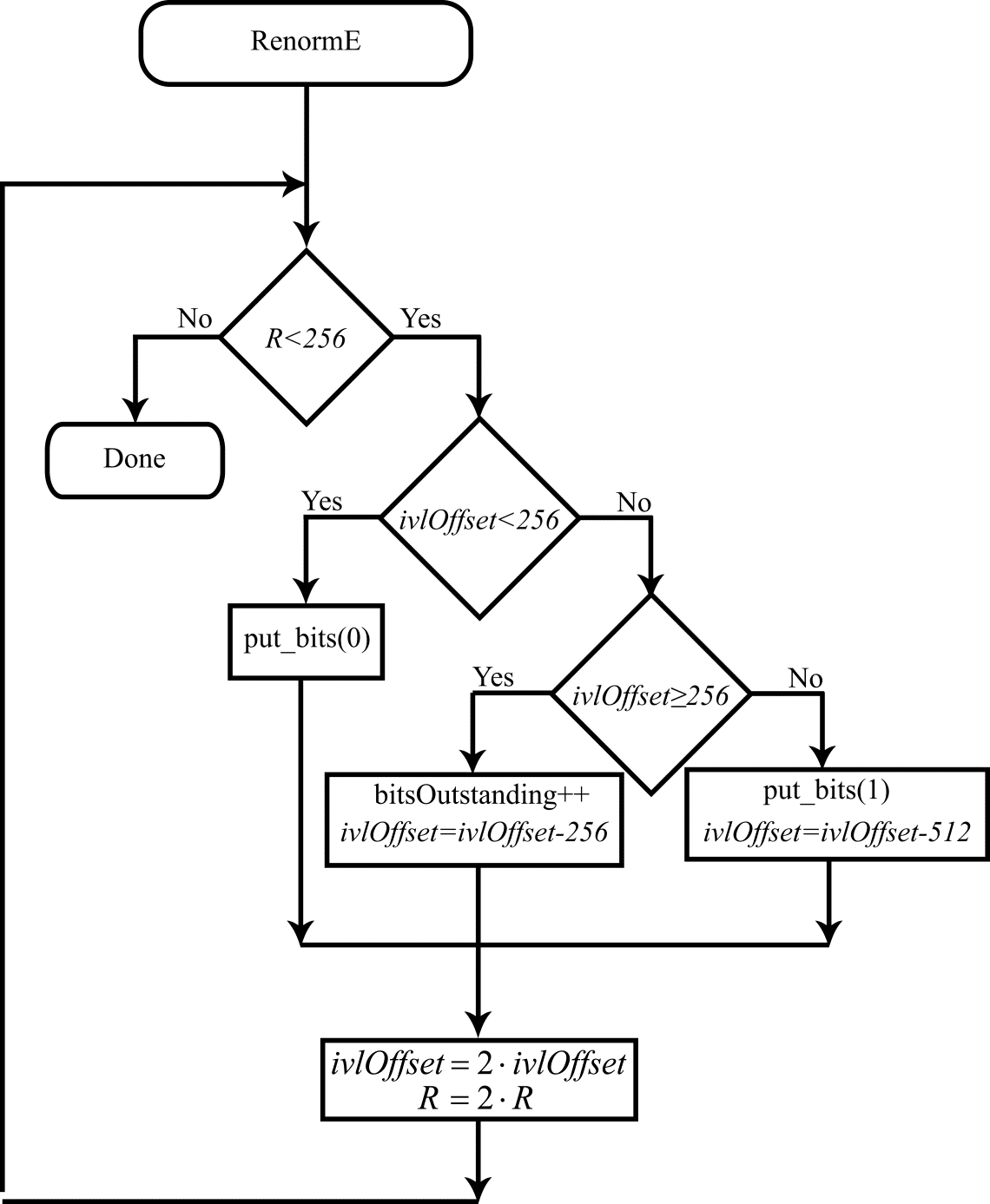 With this we conclude the discussion of the CABAC encoding/decoding algorithms. There are a quite a few additional aspects not addressed here that could become subjects of further articles. On the other hand, we have successfully analyzed the main ideas that underlie the implementation of CABAC and worked our way up from a simple example of arithmetic coding to flow diagrams that describe the encoding/decoding algorithms in the HEVC standard.