Possible ways of eliminating temporal or spatial redundancy in video images. Block-by-block basis of image processing in HEVC. The procedure of spatial prediction: four major steps. Algorithms of calculation of the pixel values inside the block being coded.

Video coding systems implementing the HEVC standard are categorized as so-called hybrid block-based codecs. “Block-based” means here that each video frame is divided during the coding process into blocks to which the compression algorithms are then applied. So what does “hybrid” mean? To a large extent, the compression of video data during coding is achieved by eliminating redundant information from the video image sequence. Obviously, the images in the video frames that are adjacent in time are highly likely to appear similar to one another. To eliminate temporal redundancy, the previously coded frames are searched for the most similar image to each block to be coded in the current frame. Once found, this image is used as an estimate (prediction) for the video frame area being coded. The prediction is subtracted from the pixel values of the current block. In the case of a “good” prediction, the difference (residual) signal contains significantly less information than the original image, which provides efficient compression. However, this is just one way of eliminating redundancy. HEVC offers another option where the pixel values from the same video frame as the current block are used for prediction. This kind of prediction is called spatial or intra-frame prediction (Intra). Thus, what the term “hybrid” refers to is the use of the two possible ways of eliminating temporal or spatial redundancy in video images at the same time. It should also be noted that intra-prediction efficiency is what determines in large measure the efficiency of the coding system as a whole. Let us now consider in more detail the main ideas underlying the methods and algorithms of intra-prediction provided by the HEVC standard.

As already noted, image processing in a HEVC system is performed on a block-by-block basis. The process of dividing the video frame into blocks is adaptive – that is, tailored to the nature of the image. As a first step, the image is divided left to right and top to bottom into identical square blocks called LCUs (from Largest Coding Unit). The LCU size is a parameter of the encoding system and is specified before the coding starts. This size can take the values of 8x8, 16x16, 32x32, or 64x64. Each LCU can be divided into 4 square sub-blocks called CU, each of which is also divisible into smaller units. Therefore, the LCU is the root of a quad tree. The minimum CU size, or the minimum quad tree depth, is also a parameter of the encoding system and can take the values of 8x8, 16x16, 32x32, or 64x64. Spatial intra-prediction is performed in HEVC for square-shaped blocks called PUs (from Prediction Unit). The PU has the same size as the CU, with two exceptions. Firstly, the PU size cannot exceed 32x32, therefore a 64x64 CU contains four 32x32 PUs. Secondly, the CUs at the lowest level of the quad tree that have the minimum allowed size can be further divided into four square PUs of half the size. As a result, the set of valid PU sizes in HEVC comprises the following values: 4x4, 8x8, 16x16, and 32x32. An example of dividing an image into CUs and PUs is shown in Figure 1. The thicker solid line marks the LCU boundaries, while the thin solid line delimits the CU sub-blocks. The dotted line represents the PU boundaries in cases where a CU contains four PUs. The figures inside the blocks show the order in which the PUs are accessed during coding.

The spatial prediction of the pixel values inside the block to be coded is carried out in HEVC using the pixel values of the adjacent blocks. These are called reference pixels. Figure 2 shows where the reference pixels are located relative to the current block being coded. In this figure, the current block is marked with the letter C (with a size of 8x8 in this example). The letters A, B, D, E, and F denote the blocks that contain reference pixels. The pixel locations are shown in gray color. It is, however, far from always the case that all the reference pixels are available for use in prediction. Obviously, the pixels from blocks D, A, and B are not accessible to blocks 0, 1, 2, and 8 in Figure 1, because these blocks are located at the very top of the video frame. But this is not the only case when reference pixels are considered unavailable. According to the standard, only those reference pixels that are located in the already coded blocks are allowed to be used for prediction. This restriction makes it possible to decode each block after it has been encoded and then use the decoded pixels as reference. This ensures identical prediction results in the encoding and decoding systems. As an example, consider the availability of reference pixels for block 17 in Figure 1. When this block is being predicted, only the pixels from blocks A, D, and E are available for it as reference. The rest of the blocks surrounding block 17 have not yet been coded, given the specified access order, and hence cannot be used for prediction. 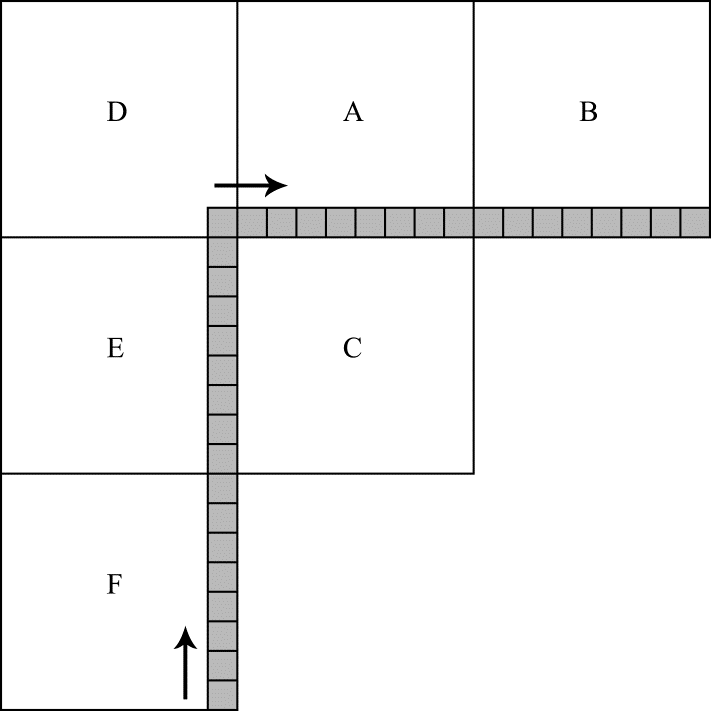 Figure 2. Reference pixel locations relative to the block being coded

In total, HEVC provides for 35 different variants of calculating the sample values in the area being coded based on reference pixel values when performing spatial prediction. These variants are called prediction modes. Each mode is identified by a unique number from 0 to 34.

The third step involves the actual calculation of the pixel values inside the block being coded. Since the calculation algorithms vary significantly for different prediction modes, let us consider them in more detail. For that, we will need some basic math knowledge, specifically trigonometry. 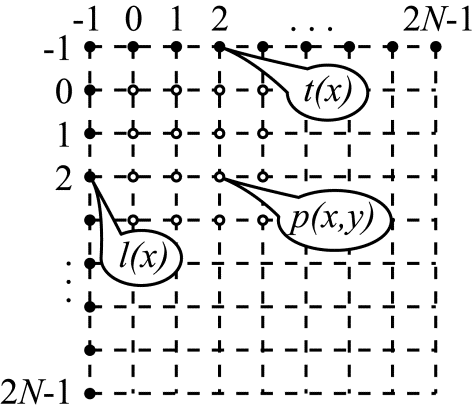 As already noted, each prediction mode is identified by a unique number. Let us proceed in ascending order.

This is the so-called DC mode. In this mode, all  $\displaystyle p(x,y) $samples are assigned the same value of $\displaystyle V_{DC} $ calculated as the arithmetic mean of the reference samples:

where $\displaystyle\lfloor .\rfloor $ denotes the operation of taking the modulus of a number. 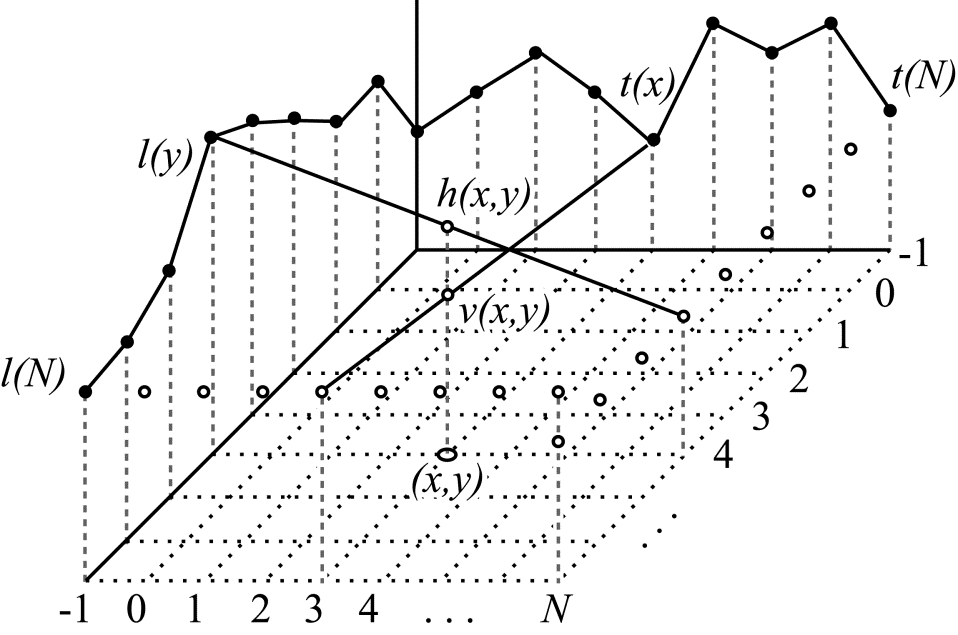 Figure 4. Interpolation in the horizontal and vertical directions

The calculations made in this mode can be described mathematically as follows: 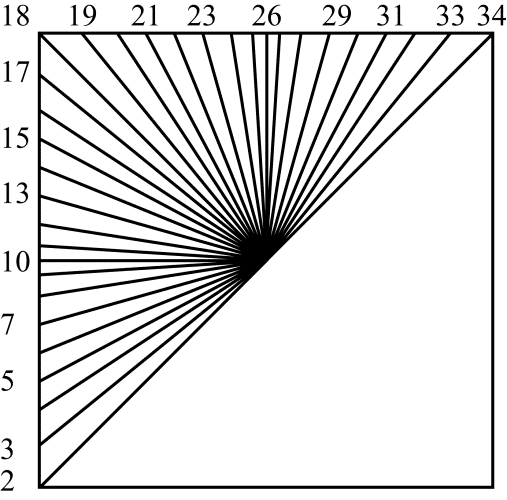 Figure 5. The numbers of angular prediction modes and the corresponding directions of reference sample distribution inside the block to be coded 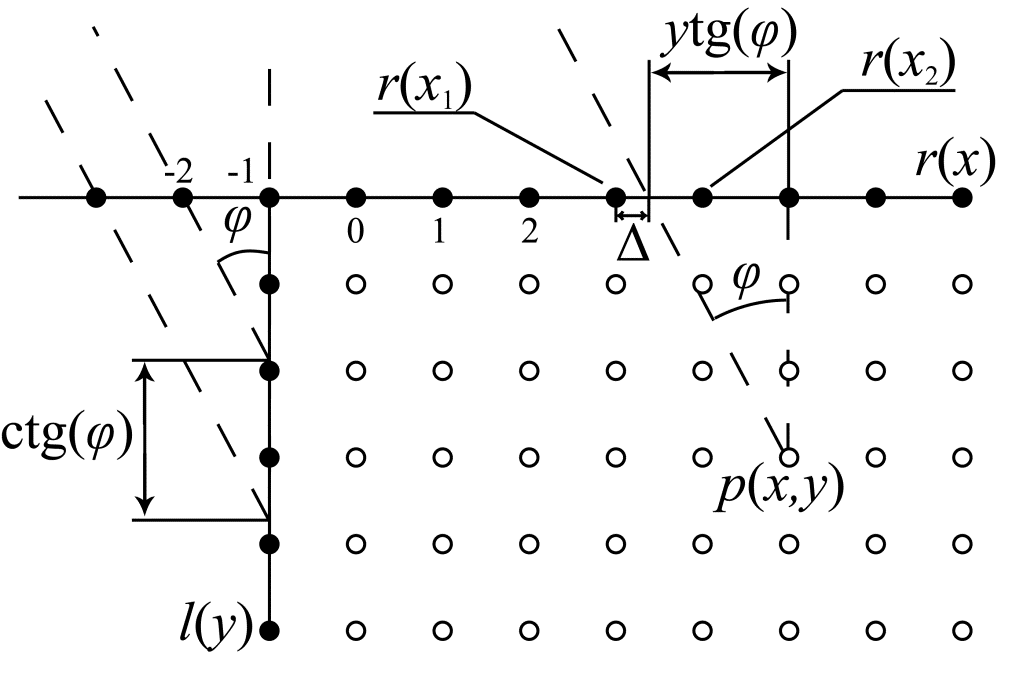 Let us consider how $\displaystyle p(x,y) $ is calculated, using Figure 6 as a reference. It is clear that the coordinate of the projection of the point $\displaystyle( x,y) $ onto the horizontal axis containing the reference samples (denoted as $\displaystyle r( x) $ in Figure 6, but more on that later) in the direction specified by the angle $\displaystyle \varphi \ $ can be expressed as:

As already mentioned, the procedure of spatial prediction can be tentatively divided into four steps, three of which we have already discussed. At the fourth step, the predicted values of $\displaystyle p(x,y) $ undergo additional post-filtering. This filtering stage is only used for 3 out of the 35 prediction modes. These are modes numbered 0 (DC), 10 (in this mode, the reference samples located to the left of the block being coded are distributed horizontally from left to right inside the block), and 26 (with the reference samples duplicated from top to bottom inside the block). When using these prediction modes, sharp transitions can occur on a block boundary between the reference samples and the predicted values. In the DC mode, such a transition is possible both on the left and the top boundary. The filtering is therefore used for the samples located along both of these boundaries. In mode 10, this sharp transition can only occur on the top boundary, so only those samples located at the top are filtered. In mode 26, the left boundary is where a sharp transition can be expected and where sample smoothing is applied accordingly.

From this, one can easily obtain: