In October 2015, MPEG and VCEG formed the Joint Video Exploration Team (JVET) that was tasked with assessing the available compression technologies and exploring the requirements for a next-generation video compression standard. The standardization of VVC began in 2018.

The main requirements for the new standard were as follows:

• provide algorithms with 30% to 50% better compression compared to the existing HEVC standard at the same quality of experience, with support for lossless and subjectively lossless compression

• variable and fractional frame rate from 0 to 120 Hz

The VVC compression standard also known as H.266, ISO/IEC 23090-3, MPEG-I Part 3, and Future Video Coding (FVC) was finalized on July 6, 2020. This article discusses the most interesting video encoding technologies that have become part of the VVC standard.

The CTU (coding tree unit) size has been increased from 64х64 to 128х128 pixels. The tiles, slices, and subpictures are now logically separated in the bit stream. Each video frame is split into a regular grid of blocks. Several blocks can be combined into logical areas defined as tiles, slices, and subpictures. These methods are already known from earlier codecs, but VVC employs a new way to combine them. The key feature of those areas is that they are logically separated in the bit stream and offer diverse options:

• the encoder and decoder can implement concurrent processing

• the decoder may elect to only decode the areas of the video that it needs (one possible application is transmitting panoramic video, where the user may see only parts of the full video)

• the bit stream can be encoded in a way that enables extracting a part of the video stream on the fly without re-encoding.

In HEVC, there was a single tree structure that allowed splitting each square block into 4 square sub-blocks recursively. VVC now offers several possible splitting operations within a multi-tree structure. The first split is into a quaternary tree, as in HEVC. Then each block can be split horizontally and vertically into 2 (BT split) or 3 (TT split) parts.

This step is again performed recursively, so each rectangular block can be further split into 2 or 3 parts horizontally or vertically. Such an approach enables much better adaptation of the encoder to the input, but increases the complexity of video coding considerably. 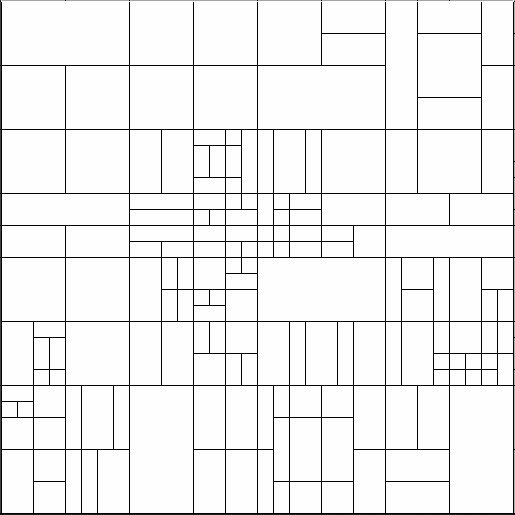 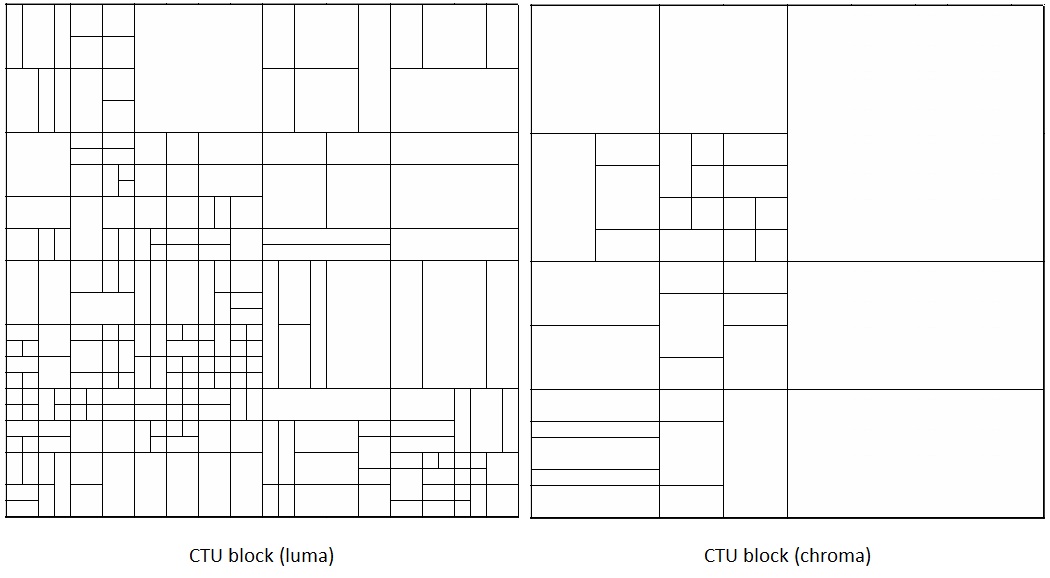 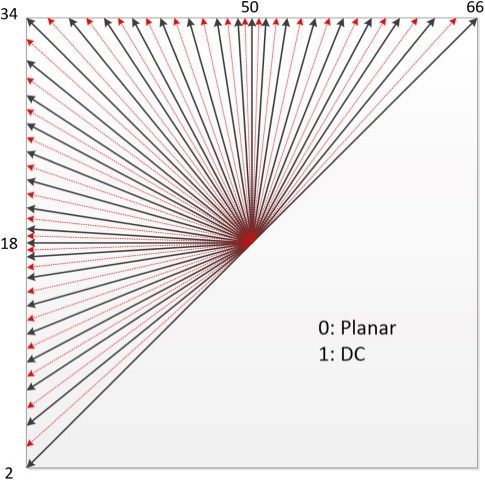 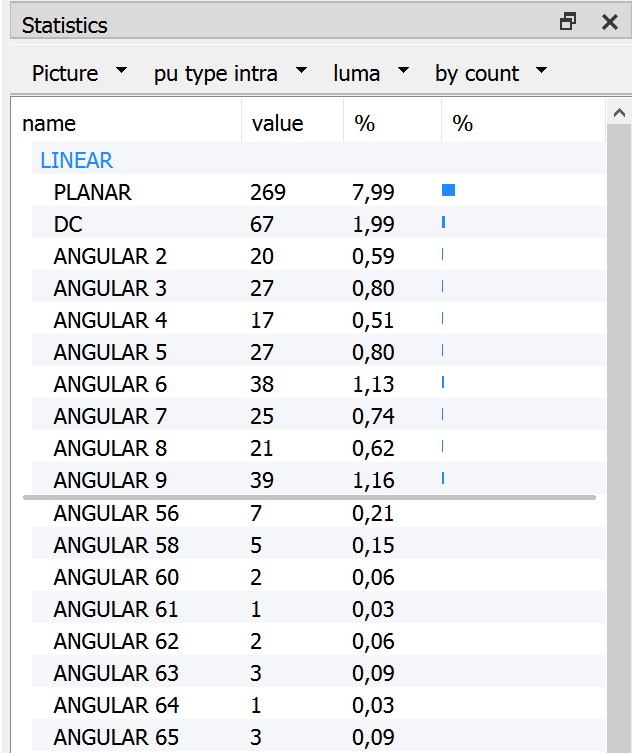 Since prediction blocks may be non-square in VVC, some traditional modes are adaptively replaced by wide-angle directions (Wide Angle Intra Prediction). Therefore, more reference pixels can be used for prediction. Essentially, this widens the prediction direction angles to values that exceed the normal 45° and –135°.

Furthermore, in many cases, the luma and chroma components carry very similar information, therefore a new prediction mode called Cross-component Prediction was added for those cases. In this mode, a method is used that directly predicts chroma components from a reconstructed luma block using a linear combination of reconstructed pixels with two parameters, a factor and an offset, where the factors are calculated from the intra reference pixels. The block is also scaled if necessary.

It is now possible in VVC to make a prediction using two lines that are not directly adjacent to the current block; this is called Multi Reference Line Prediction. 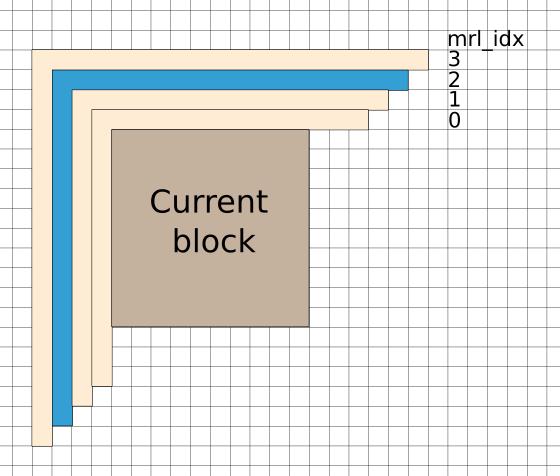 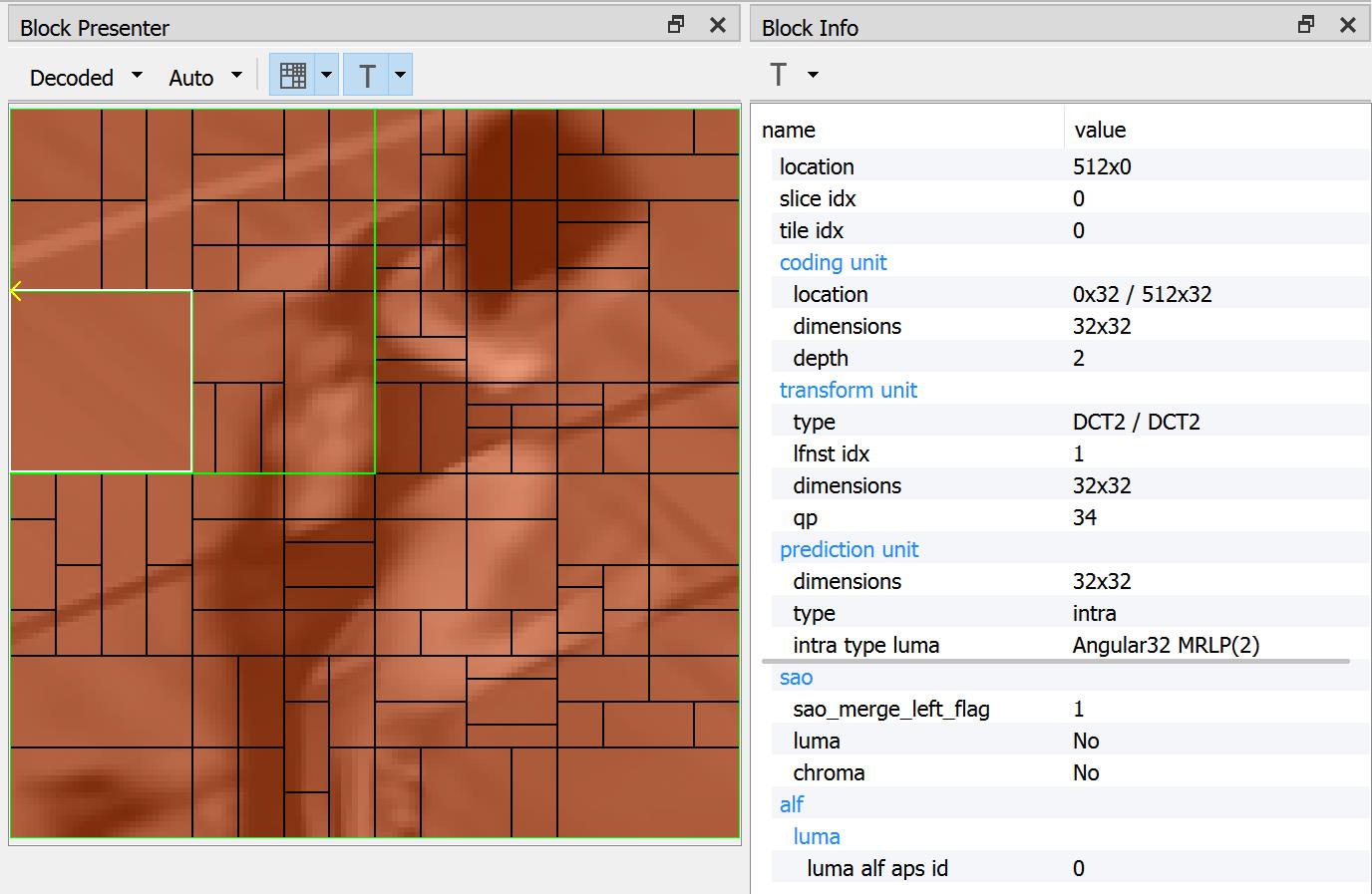 The basic concepts of uni-directional and bi-directional motion compensation from one or two reference pictures are mostly unchanged. However, there are some new tools that have not been used in a video coding standard before

The conventional motion compensation represents two-dimensional planar motion. This kind of motion is rarely encountered in actual videos, however, because objects move more freely and/or change their shape. For these cases, the Affine motion model was implemented in VVC that uses two or three vectors to enable motion with four or six degrees of freedom. 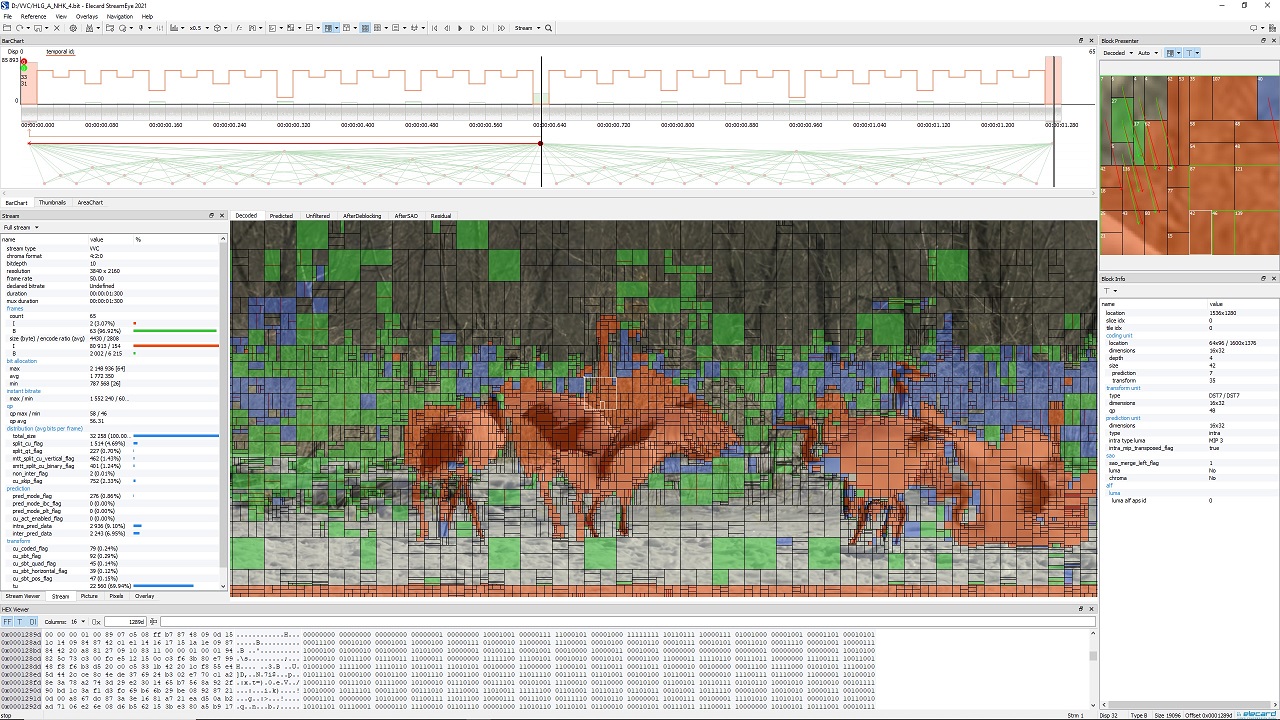 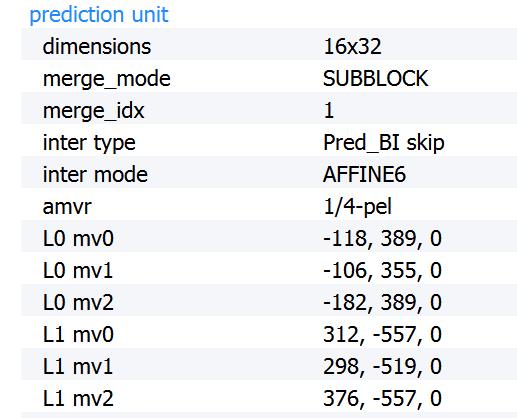 You can now use Adaptive motion vector resolution for encoding. This helps reduce coding costs for large values of MV, which is especially relevant for high resolutions (4K and higher).

A method for compensating the motion of overlapping blocks is now available. This method, called Overlapped Block Motion Compensation, overlaps the edges of the adjacent blocks and then smooths them to avoid sharp transitions that usually occur with inter-prediction.

If the block uses bi-directional prediction, the new BDOF (Bi-directional optical flow) method can be used to refine the motion of the prediction block. This algorithm does not require decoder signaling and provides 2% to 6% bitrate savings.

Rectangular blocks usually do not work well for predicting real video. For more effective prediction, Geometric Partitioning has been added in VVC. This option allows non-horizontal splitting of a block into two parts with separate motion compensation for each one. The current implementation includes 82 different geometric partitioning modes.

The maximum transform block size has been increased to 64×64 in VVC. These transforms are especially useful when it comes to HD and Ultra-HD content.

Unlike HEVC that only has a single DCT (DCT-II) transform, VVC has 4 separable ones:

The encoder can select different transforms depending on the prediction mode.

The Adaptive LoopFilter in the VVC standard has the following features:

• each 4х4 luma block is categorized into one of 25 different classes using a vertical, a horizontal, and two diagonal gradients

• based on the calculated gradients, the filter coefficients can undergo one of three transforms-diagonal reflection, vertical reflection, or rotation-before they are applied.

As seen in the graphs (Fig. 1 and Fig. 2), the coding efficiency of VVC exceeds that of the previous standard at all bitrates. Consider the BQMall graph (Fig. 1) and the values obtained in its middle section. For the HEVC sequence, we obtained a bitrate of 1002 kbps and an APSNR of 38.58 dB. To achieve a similar quality using VVC coding, a bitrate of 696 kbps would be sufficient (at an APSNR of 38.50 dB), yielding bitrate savings of 30%. The encoding time for the HEVC encoder was about 16 minutes, whereas for VVC it amounted to 2.29 hours, which is 9.3 times longer. 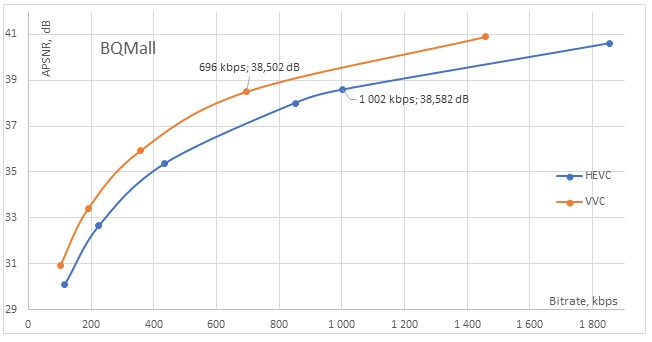 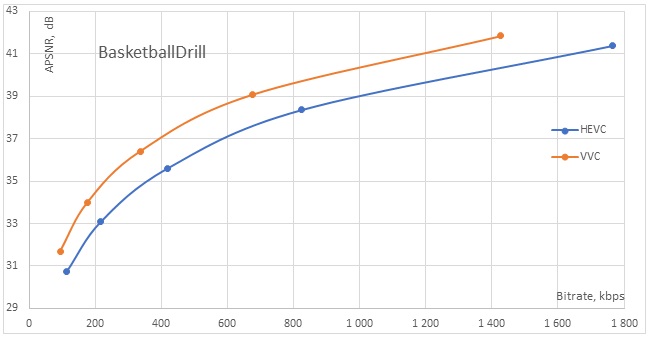 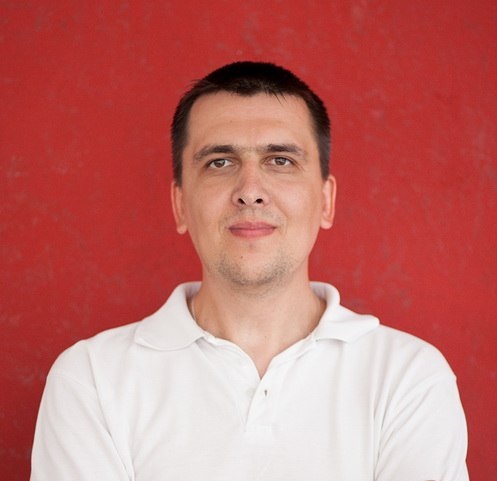 Dmitry has been passionate about video shooting, mastering, editing, encoding and analysis since the very birth descending from a family of video engineer. With his over 20 years of experience in digital video, he leads QA and video production team at Elecard.